Undoubtably the easiest way to loft a camera with very little fuss is to attach it to a pole and stick it into the air! I use a decorator’s extending pole which has a modified end attachment to accept a camera mount. Most modern cameras have either NFC, Bluetooth or Wi-Fi to enable you to control the camera usually via a smartphone. In earlier times I have used modified radio controlled equipment but that is now old hat.

Other poles available are these extending carbon fibre poles allowing even greater heights but some can get a little unwieldy and you may have to either reduce the camera weight/size or only use stiffer sections of pole.

The next stage is to go for the mast type. Now while you can achieve great heights with masts that are either manually or hydraulically raised you enter the realm of expense and lack of portability. Nevertheless many professional camera outfits use them with great effect.

First impressions may lead you to think that a balloon could be an easy way to loft a camera and it is up to a point. In my mind there is one issue that complicates the method and on further examination leads me to dismiss using balloons for casual aerial photography.

In order to lift any payload you have to have a balloon of a certain size to enable you to inflate it with a lighter than air gas that will provide the lift. The issue is that in order to be safe the only widely available inert gas is helium. If you did not know helium is a finite Earth resource. That means that once the Earth’s reserves of helium gas have been used there is no more, currently we are unable to manufacturer helium. So the next time you inhale the gas from your spent party balloon so your voice sounds like Donald Duck ……. think again!

Currently the USA has the largest reserve of helium gas and there have been warnings by Nobel Prize Professors that at the rate of use the reserves will run out in 25-30 years. However, there have been new reserves found in East Africa in 2016 which are substantial.  The main uses of the gas are for making LCDs, optical fibre and perhaps most importantly in the cooling of supermagnets that are in MRI scanners.

As a final thought on balloons if you are taken with the idea of using balloons then you could of course go down the hot air route. You could even attempt the solar hot air route! This entails using black plastic bags which naturally heat up on exposure to the sun’s rays. The air inside expands and hey presto you’re away. Using one of these small action cams people have had some success, although I’ve not tried it. Finally you can also get model hot air balloons but because of their complexity tend to be expensive.

Yes, yes, yes. IMHO they are multi-copters, the word drone is an evocative word used by the lazy media types to create a sense of awe in their potential mis-use. With that off my chest! A multi-copter, generally a quadcopter is a brilliant way of lofting a camera.

In the early days of their conception radio control modellers started to adapt model helicopter systems, with the public release of GPS and chip technology making incredible in roads into making micro chips that control orientation, it was not too long before the software whizz kids were able to control multi-engined prototype aircraft. Running alongside all of this was the rapid development in small electric motor technology and very high capacity batteries.

Interestingly I tried to get on a project where you could receive the basic parts to build your own 3D printer on condition the first parts you made were for someone else to make their printer. That done one of the popular projects was to make the airframes for multi-copters.

All that of course is now past and multi-copters are now used for so many purposes, aerial photography just being one use.  Sadly with their popularity comes the inevitable mis-use. Again it is the media out for a cheap shot that compounds the issue in how they report them and people who have been with them from the beginning feel put out that all of a sudden there are moves by the authorities to restrict their use. Not only that the responsible manufacturers have been fairly quick in using the technology onboard the multi-copters to assist in restricting where they can be used by geofencing. (Geofence: the ability to create a virtual geographic boundary, usually by GPS, that can either enable or disable a mobile device when it nears, enters or leaves an area). You can’t blame them after all their business could be at stake. The result is that airports, danger and restricted area co-ordinates  can now be loaded into the firmware of the craft to restrict and in some cases prevent flight altogether.

Yours truly using my decorator's pole to take a 360 degree picture. Location here is Bosley Locks on the Macclesfield Canal. 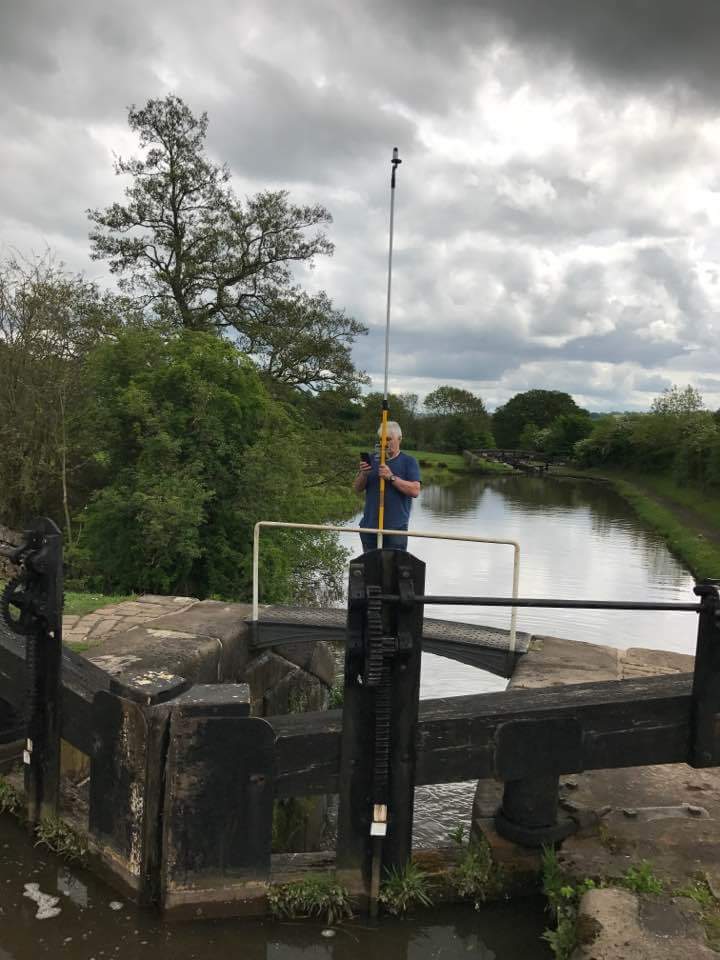 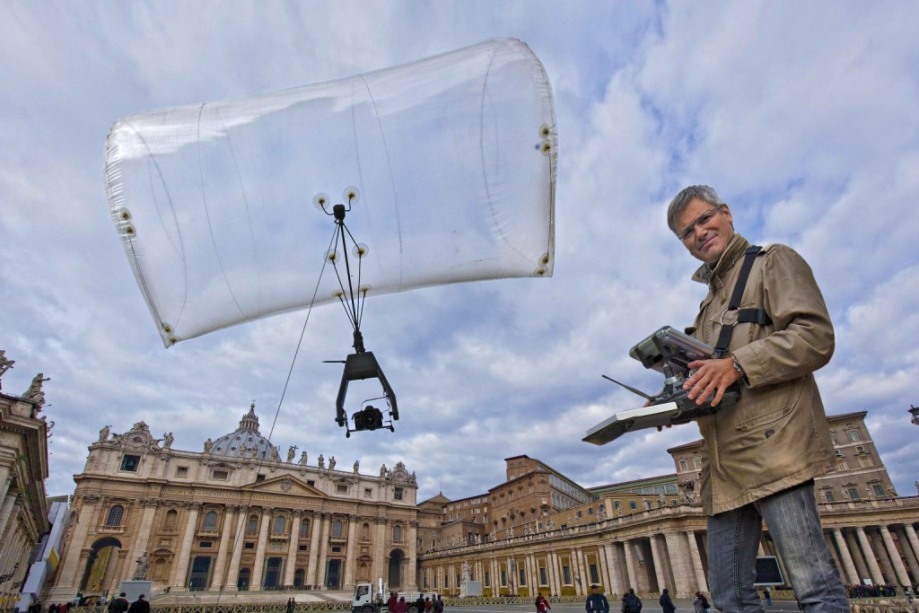 Stephane Compoint (above) is a photographer specialising in Balloon Aerial Photography and has taken many such pictures of the Vatican. By using a lightweight camera the resulting tethered balloon is quiet small.

In the UK apart from pretty generous height rules the governing authority, the CAA and its operational arm NATS, require anyone who operates a multi-copter for hire or reward to undergo a recognised training course, this includes aerial photography. Up to a point they are not interested in what you want to do but they are interested in how and where you operate your multi-copter simply because a badly maintained, ill thought out flight plan and dangerously flown multi-copter can and does cause problems for not only its operator but for those on the ground and in the air. The UK have, through legislation and training, an enviable record in air safety and as multi-copter use will undoubtably increase there is the need to educate the wider public as to the safe operation of such craft.